Founded in 1837, the City of Atlanta, Georgia has a long, rich history that began at the end of the Western & Atlantic railroad line. Originally named Marthasville, this remarkable and rapidly growing city has maintained its position as a transportation hotspot and is now not just a hub for the nation, but for the world as well. In fact, the Hartsfield Atlanta International Airport is one of the busiest in the United States. Furthermore, direct flights to Asia, Europe, and South America make Atlanta conveniently accessible to the fifty-plus countries with chambers of commerce, consulates, and trade offices here, as well as to the more than 1,000 international businesses that call Atlanta home. With the world headquarters for thirteen Fortune 500 companies, the city has emerged, not only as a transportation hub but also as a banking center.

Clearly, this city has its eye on the future, though it also has strong ties to its history. Considered the capital of the Southeast, Atlanta is home to around 420,000 residents, though the metro area has a population near 4.1 million. The unprecedented growth of the city and the metro area can be seen in the ever-transforming downtown skyline and the skyscrapers erected in the Buckhead and Midtown business districts. The area is home to a long list of exciting attractions and amenities that include destinations like the APEX Museum, Carter Presidential Library and Museum, the High Museum of Art, Imagine It! Children’s Museum of Atlanta, Georgia Aquarium, Six Flags, Atlanta Botanical Garden and many more venues. Atlanta also encompasses a long list of impressive landmarks like Centennial Olympic Park, Martin Luther King Jr. Center, Oakland Cemetery, and Underground Atlanta. Furthermore, the city is home to the Falcons, Hawks, Dream, Braves, United, and Silverbacks sports teams. Recreation opportunities also abound here and the PATH Foundation maintains more than 180-miles of off-road trails while the Atlanta Beltline is comprised of six miles of paved trails for walking and biking.

Residents of Atlanta enjoy all of these great amenities, as well as fabulous public transportation that includes MARTA, Amtrak, Atlanta Streetcar, Buc Shuttle, Georgia Regional Transportation Authority Xpress Bus, Cobb Community Transit, and Gwinnett County Transit. With all of these extraordinary advantages, is it any wonder why Atlanta is such a popular destination for prospective homebuyers? Atlanta real estate is also spectacular and is as diverse as its population. Whether you are searching for a land upon which to build, a condominium, townhome, multi-family home, single-family home, a luxury estate or something in between, you can find it in Atlanta. Atlanta is home to a multitude of neighborhoods and subdivisions with fantastic housing options. Many of these are managed by neighborhood associations like the Adams Park Neighborhood Association, Ben Hill Neighborhood Association, Capital View Neighborhood Association, Grove Park Community Association, Lindridge/Martin-Manor Neighborhood Association, Poncey-Highland Neighborhood Association, and the Virginia-Highland Civic Association, among many others. Other popular neighborhoods in Atlanta with neighborhood associations include Adair Park, Downtown Atlanta, Berkeley Park, Brookwood, Buckhead Forest, Cabbagetown, Candler Park, Castleberry, Collier Hills, East Lake, Edgewood, Grant Park, Home Park, Inman Park, Kirkwood, Lake Claire, Loring Heights, Morningside/Lenox Park, Piedmont Heights, Reynoldstown, Ridgewood Heights, Summerhill, Underwood Hills, and West End. Homes for sale in these Atlanta neighborhoods come in a broad price range ensuring you have abundant options regardless of your budget or personal tastes. If you would like more specific information regarding available real estate in Atlanta, Georgia, please contact us so we may assist you.

BEAUTIFUL, renovated condo across the street from Piedmont Park with stunning view of Buckhead skyline! This bright and open floorplan has a great flow and tons of natura...

Calling on Builders and Contractors to come view this lot and location in one of Atlanta's most sought after areas. This lot is close to the Westside Reservoir Park, Atla...

Located Minutes from Beltline. Imagine yourself enjoying the beautiful weather - from the front porch to the back deck. Plus there are plenty of places to make an office ...

Great lot layout tucked away off East Roxboro Road. This property is located in the Pine Hills, North Bulkhead area and close to North Druid Hills, Brookhaven. The lot ...

The Dunwoody location on this one will knock your socks off! This elegantly updated executive home is within walking distance of Vanderlyn Elementary, Dunwoody HS, and po...

Beltline living at its finest! Just one staircase away from SPX Alley and then on to Krog, Ponce City Market, Ladybird and everything in between. No need to ever get in t...

In the heart of Old Fourth Ward, across the street from Ponce City Market and the Atlanta BeltLine, this open and spacious, 2 bedroom, 2 bathroom loft is move in ready. A...

GORGEOUSLY renovated and full of the unbeatable charm of the era it was built--this stunning condo off Peachtree is a truly special place. Fresh interior paint, smooth c...

Colony House 1407 is the entertainerâs dream, this magazine worthy one of a kind Penthouse with breathtaking views over Ansley Park from both living levels of your home...

Just WOW!!! This house is a true diamond in the rough! Brandon elementary! 1 street/culdesac neighborhood in the perfect location! Rocking chair stone front porch. 8' do...

Photos coming soon. Situated right off of Highway 70 and just minutes away from downtown Atlanta, you will not want to miss out on this 3 bedroom and 2.5 bathroom home! H...

are industrial-chic loft directly ON the Beltline (literally)! Factory Lofts boasts an unbeatable Virginia Highland location and is steps away (91 WalkScore) away from Po... 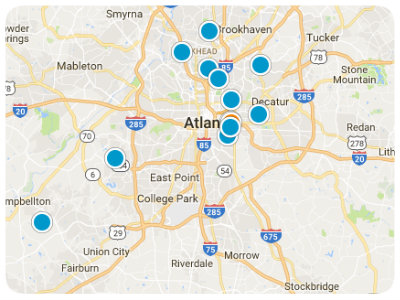